Arthur Berini: An Utopian with Reference to Reality

The range of the works of Arthur Berini is extremely broad. He displays no fear in the face of any of the applied arts, he has created interiors, photographic backgrounds and stage sets, he has designed film posters, magazine covers and car body-works. However, in his freelance work he asks questions about philosophy, history of religion, depth psychology, all of which transcend day-to-day practical matters, leaving them far behind. And yet the seemingly incompatible poles pervade the individual works. It shows that special care that the self-taught craftsman makes his own, when completing a commission and which now conversely serves to abstract the tangible representational, to dematerialise the physical material.

If you resolve the ornaments or frequency bands into their basic components, you find yourself back in the astral body.

Arthur Berini comes as a free artist from painting, from representational painting, from where he gradually moved over into abstract painting in the early nineties. And he is of the firm opinion that this decisive step, even if it occurred a hundred years ago seen from the perspective of the history of art, is one that each and every individual should be able to take for himself even today. We are already clearly aware at this stage of how his artistic creations are always referring us to a different existential level. Distancing ourselves from the reality which we view around us, this, after all, always tends to mean: freeing ourselves from it, leaving it behind. And in the end this is exactly what happens in everyone’s life as death approaches. Nearing, not reaching: consequently, this abstraction, this distancing is not absolute, even if working titles, as well as more or less clearly identifiable subjects such as vessels or waves, will always evoke a sensory appearance. A mythological subtext remains all-pervasive, while mythology is here basically interpreted not as a contrast to nature, but as its origin – and also in the same spirit, that the microcosm of the individual work always wants to be the reflection of the macrocosm, obeying the very same laws.

The fluorescent paint as materiality recalls the sphere of the ether body itself.

This then describes the agreed distance to concrete art, of which we may well be reminded by the modular arrangements of stripes and squares of existing compositions. This distance is already expressed in the linguistic usage of the artist who is pleased to describe abstract forms as ornaments – a horrendous term for all purists from which he completely excludes himself. But the function of the ornament in Arab art is very close to his own views. Its purpose here is, after all, to obey the ban contained in the Christian Bible, depicting the image of God (IT), and yet to make visible that which is divine.

The physical “I” perceives this world of colour light patterns subjectively as a world of dreams, desires and fears. Its origin is found in the world of white light or ideas.

At least, the utopian hope of changing the world with art may remind us of that which is concrete. Arthur Berini takes this premise, by which he seeks his individual form for something close to his heart, to a totally different level: not as a design for a social system, but – based on the historically founded knowledge that each system is as good and as bad as the people who make it – as an appeal to eachand every one. For the process of civilization is not run by its own momentum in the direction of a better future, instead it also knows that tendency to regression, against which it knows how to act with the very tools of art.

The belief in the changing power of art leads one instinctively to question the credibility of he who expresses it. As far as that is concerned, a quick glance at the biography of Arthur Berini is without doubt instructive. As a child he was confronted with an extraordinarily luxurious lifestyle from which he was able to distance himself relatively early on when he suddenly found himself at the other end of the social scale within a short period of time. This has led to a life consisting of a bare minimum of external possessions.

A pool of energy rests unmoving, quite still, outside all qualities of time, neutral, all-fulfilling, accessible at all times. Within it the latent ability to move, awaiting activation by impulse and information, coded for a variety of dimensions.

This illuminates the legitimatisation of a creation that follows no particular trend in keeping with the times, but rather obeys its own necessity by becoming astonishingly virulent in what is in any case the classical compositional criteria: the dialectics from above and below, from left and right symbolising those that are masculine and feminine, alternatively of life and death. The reduction to its essence accompanying the abstraction became intensified in 1996 with the extensive restriction to the monochrome and with the use of fluorescent paints sprayed on canvas and then on carpentry boards of varying thicknesses. These colours can have clear psychological or symbolic connotations, but of course nothing is unambiguous if the contours appear in a shimmering blur and their effect, alternatively their interaction, continuously fluctuates with the changing ambient light. That which is material becomes dematerialised and spiritual in unreal transitions, that which is rationally predictable is exposed as unpredictable. This incomprehensibility expresses itself unmistakably in the constantly unconvincing attempt at reproducing these works photographically. It becomes increasingly obvious that diminishing daylight intensifies luminosity – just as internal pictures become more important than external ones as night falls, visible reality gives way to the metaphysical. (Martin Kraft) 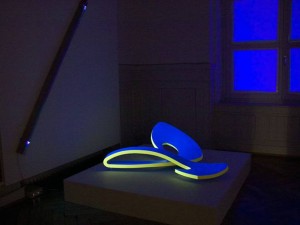 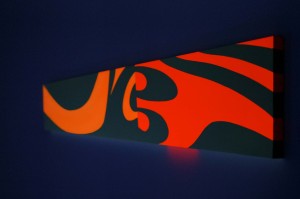